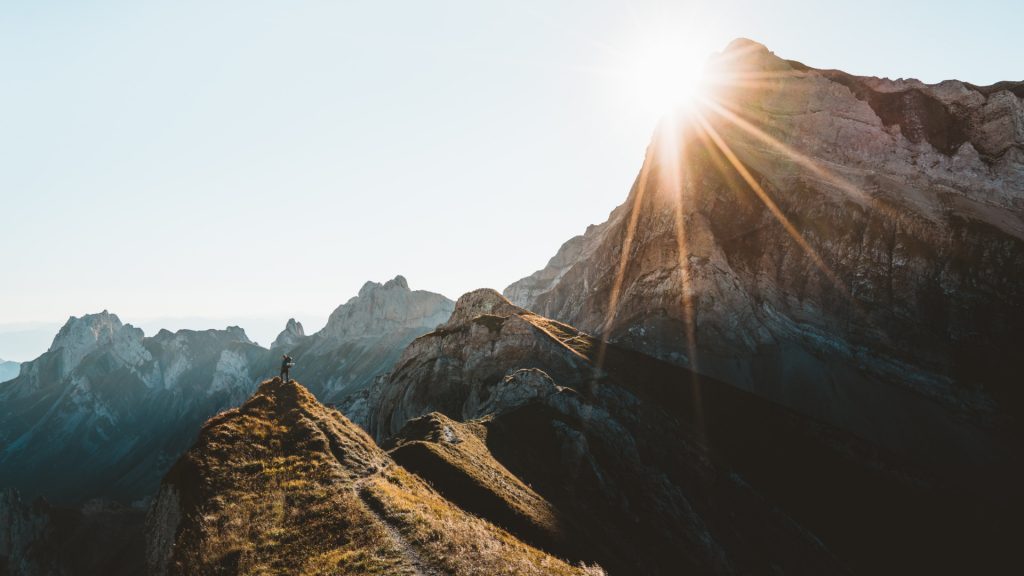 After six days Jesus took with him Peter, James, and John the brother of James, and led them up a high mountain by themselves. There he was transfigured before them. His face shone like the sun, and his clothes became as white as the light. Just then there appeared before them Moses and Elijah, talking with Jesus.
– Matthew 17:1-3 NIV

The Scriptures are filled with mountain experiences. The Ark came to rest on the top of a mountain after The Flood. Abraham’s ultimate test of faith with his Son, Isaac, took place on a mountain. God gave Moses the Ten Commandments on a mountain. Elijah defeated the prophets of Baal on Mount Carmel, and Isaiah assured Israel that Mount Zion would be the site of a feast unlike any in the history of the world. Jesus’ teaching of The Be-Attitudes happened on a mountain; He died for the sin of the world on Golgotha, a mountain outside the city gate, and in Matthew 17, He revealed Himself as the Son of God to Peter, James, and John high up on a mountain. Mountains are significant to how God speaks.

In the previous chapter, Jesus establishes Himself as the One over and among all by the disciples’ confession. He was no ordinary man or even a great prophet or leader like Elijah or Moses, but He was indeed the Son of God. Jesus confirmed the words of Peter and that his declaration was revealed to him by the Lord. Now, he would show that He was the Son of God in a spectacular demonstration of His glory upon a mountain. He takes three disciples with Him, and verses 2-3 tell us of this incredible scene:

There he was transfigured before them. His face shone like the sun, and his clothes became as white as the light. Just then there appeared before them Moses and Elijah, talking with Jesus.

The transfiguration was a statement about Jesus’ authority and power. This revelation demanded that people receive Jesus as transcendent and One who had the divine credibility to speak to them. It revealed that Jesus alone is supreme over all men and that Moses and Elijah were vessels and servants that fulfilled a temporary purpose in God’s ultimate plan. Jesus establishing Himself as the High Priest and prophet caused so much division in the early church, yet God had already instituted this.

The transfiguration also confirmed the glory of God, and that the mission of the gospel and the advancement of the kingdom would reveal that same glory. The three selected disciples saw a preview of this and it encouraged and emboldened them with the truth of Jesus. They could trust His identity and place their faith in His promises, provision, and power just as we can today for the same reason.

This mountaintop experience was not random. It was a precisely timed event within the will of God to show the disciples and us what kind of Messiah Jesus was and is. It demonstrates the greatness of the Lord and helps us tear down our limited and human notions of Jesus and how he relates to us. Our mountain experiences are not random either. God uses them to show us who He is and what our potential is in Him. He meets us there, teaches us, changes our lives, and sends us back into the world with faith, hope, and joy to be on mission with Him.